This year the Foursomes survived torrential rain at Duncan Meadows with finals at Uplands going two better with not only rain but wind and hail! Through it all, the ladies persevered and we thank everyone for carrying on through these challenging conditions.  In between, there were three pleasant days at Cedar Hill, Gorge Vale and Cowichan.

Our 2019 CHAMPIONS  qualified into the Championship Flight on a countback and then went full steam ahead on their way to the top of the ladder.
The next day Ginny was off to Ireland (with 15 men no less!!) to keep the momentum going at Port Rush. 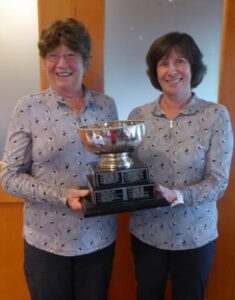 Following are the Flight Winners and Runners-Up:

Our sincere thanks to the Clubs which participated in this year Tournament and to their staff and volunteers.   We can’t do it without you!