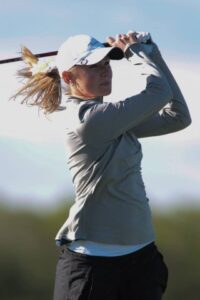 Megan was born in Victoria and attended Claremont Secondary School. At the age of 13, golf came into her life and it wasn’t long before she moved up to competitive events, playing in Zone 5 Junior Girls’ tournaments and eventually Provincial and National events. As time went on and Megan’s game showed rapid improvement, she began taking lessons and looked into different University options, resulting in a 5 year program with the University of Victoria from 2009 to 2014.

Megan attributes much of her success to those early competitions in local events and helping hands along the way and looks forward to future successes as she continues her golfing career. 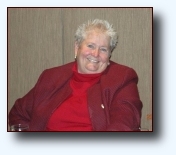 Sadly, we announce the sudden passing of Merna Mickelson, Chair for Zone 5, Southern Vancouver Island. Merna had just completed a mini holiday with a friend, arriving in Kamloops for the BC Senior Games. On August 22nd, after completion of the first hole of competition, Merna collapsed from a massive heart attack and did not regain consciousness.

Merna was born in Lethbridge and moved to Victoria as a teenager where she met her husband, Morley (deceased May 2013) and raised two daughters, Joanne and Laura. Merna also has 5 grandchildren.

Merna first started playing golf in the 80’s and joined Cedar Hill Golf Course in 1994 where she was Captain in 2001 and served on many of the Women’s Committees. In 1998-1999, Merna was the District Secretary, then returned as Vice Chair in 2002/2003, stepping up to Zone Chair 2004/2005. During her time as Zone Chair, Merna also chaired the Recognition Committee for British Columbia Golf, having done the bulk of the work collecting information from other organizations. She was instrumental in writing the criteria for both the Distinguished Service Award and Volunteer Recognition Award. In 2010, Merna again returned to the Zone as Vice Chair, and then Chair for the 2012/2013 seasons.

Her passion was golf, and her enthusiasm shone through with her dedication to the Zone, her fellow players, and friends. That jovial laugh, those twinkling blue eyes, and that beautiful smile will long be remembered.

A celebration of life will be held at Cedar Hill Golf Club on Sunday, September 8th – 2 to 4 pm. In lieu of flowers, a donation to World Vision Canada would be appreciated. Merna sponsored a child in Bangladesh for many years.

1948 was the beginning of a long and still active golfing career. A youngster of just 14, Shirley Nasheim (Naysmith, nee Fry) joined the Gorge Vale Golf Club along with her good friend and Hall of Famer, Dorothy Wilks(Herbertson), for a mere $10 per year. Parents and Club Management felt it was much easier to let them have the run of the course rather than chasing the two back under the fence every day, as their homes were at the end of the 10th green. In 1996, Gorge Vale Club presented Shirley with an Honourary Membership. Shirley’s 63 years at her Club ranks second in years of membership for active players.

On the Provincial side, Shirley was Runner-up at the 1959 BC Amateur and Medalist in l960, 1962 and 1963 representing the Province at Nationals; twice as a Junior and four times on the BC Amateur Team. As the 1952 BC Junior Champion, Shirley was invited to the Canadian Amateur in Edmonton that year and along with her chum, Dorothy Herbertson, they were chaperoned by Mr. & Mrs. Jack Clark (President of Gorge Vale and also the Clark in Clark & Cordick, the well known feed store at Douglas and Bay Streets). When one of the BC Team members failed to show, Shirley was elevated to the Team.

Of all the tournaments, Shirley is most proud of the B.C. Parent & Child tournament which she won with her Mother, Margaret Fry, in 1962. This was the first Mother/Daughter combination to win a competition previously dominated by Fathers/Sons. The trophy is now retired to the BC Golf Museum.

After 3 brothers and raising 4 boys, Shirley was ecstatic to welcome her first grandchild in 1982, a girl. The family has now grown to 4 grandchildren and 2 great-grand kids.

Golf has been scaled back but not forgotten for the occasional weekly game, however Shirley now channels her boundless energy to the Esquimalt Seniors as their President as well as she and her husband, Ray, spend a great deal of time with the Poppy Fund for the Esquimalt Legion.

A name to remember. Outstanding Junior, Amateur, and now entering the ranks of collegiate accomplishments at the University of Southern California. Her major at USC is sociology.

Born in Brisbane, Queensland on February 11, 1980, her parents moved back to Canada when Leila was just 2, and settled in Winnipeg. Her love of the game began at age 11, and it wasn’t long before she won her first tournament in 1991, followed by her next win in a regional tournament for Alberta, Saskatchewan and Manitoba. After that, she placed fourth in the North American Championship in Arkansas for girls in her age group.

In 1993, Leila’s family moved to Victoria where she enrolled at Lambrick Park Secondary and their team won the 1998 B.C. Girls Div. High School Golf Championship (Leila finished fourth). Her trophy case includes two Manitoba Junior Championships, two B.C. Junior trophies, one BC Amateur title, a fourth place finish at the Canadian National Junior Championships, a Canada team member at the 1997 Junior Worlds and back to back wins at the 1999 and 2000 C-FAX Amateur Championship held in Victoria, B.C. At this years C-FAX, Leila had a record setting 72 at Arbutus Ridge on the final day of a 3-day competition, winning the championship by eleven strokes.

Leila hopes to walk in the footsteps of Lori Kane, but first it is on to the task of qualifying for the U.S. Amateur.

Another ‘local girl makes good’ story, and how many of you know that Marion is a member of the Greater Victoria Hall of Fame? Nooo, not for golf, but for being a member of the 1949 team that brought the first Canadian Women’s Basketball Championship to Victoria. What could be more exciting than playing arch rival Vancouver, best out of three last game, with 4 seconds to go, Vancouver takes a foul and your teammate steps up to the line and sinks one of two free throws for a one point win?!! The team of 7 players went on to win the Canadian Championship, beating Edmonton and Toronto. All games were played in Victoria to a packed gym at Vic High.

Golf was a major part of Marion’s life at Royal Colwood until the kiddies (3) came along. During a period as ‘Domestic Goddess’ from 1959 through 1975, she looked around for a new activity and became involved in curling. With her usual enthusiasm, she was Ladies Curling Chair at the Racquet Club of Victoria and was very involved with publicity for the 1974 Ladies’ Curling Championship held in Victoria’s Memorial Arena. In 1975, with the opening of the Oak Bay Recreation Centre, she was Co-ordinator of the Curling and Social Lounge and was one of the founding members of the Oak Bay Ladies Curling Club.

Born in Edmonton and educated in Calgary, plus two years at the U. of Manitoba, our “Peg” has kept an eye on the District since 1989, serving first as Publicity Chair, then as Treasurer from 1992-1995. From 1995-2000 she served as the District’s Course Rater and Asst. Course Rater for B.C. in 2000, and in November 2000 took over the duties as B.C. Coarse Rating/Handicap Director. It must run in the family as Peggy’s sister, Lee Misura, is also a course rater in Alberta. Both gals are keen competitors who love to tee it up at the Canadian Seniors, an annual tradition they started a few years ago.

When not on the golf course, she and husband Bryan can be found on the road in their 5th Wheel. They completed a cross-Canada tour in 1998, and her new position will no doubt rack up a few more miles. In February they will pack their bags and head to the airport for a sightseeing and golfing holiday in Thailand.

At the BCGA’s March 2008 AGM, Peggy was presented with the 2007 BCGA Distinguished Service Award. While retired from the BCGA, Peg has returned to the Zone 5 Women’s Committee as Rules Chair for the 2009/2010 season. 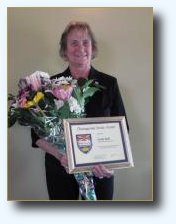 Linda’s golfing career began in the summer of 1993, when she joined Cordova Bay Golf Club in Victoria and set about organizing the women into what is now a very active and successful ladies division. She became their Captain for the 1995-1996 season.

Linda joined Gorge Vale Golf Club in 1996, and along with her Committee, has revitalized the weekend Mixed Tournaments into a fun event, encouraging single and new members to sign up promising she would find them a partner, and she always does.

After becoming Ladies’ Captain in 2005-2006, she initiated ‘An Information Evening’ to encourage new and current members to learn more about the Ladies Division, their tournaments, sign up for Interclubs, DOF, BTC and other activities. Juniors and their parents were invited to participate and learn more about their club with trivia questions. Gorge Vale, Zone and BC Champions (GV) were invited to talk with the Juniors about their successes.

Believing there were a lot of talented members at her club, Linda organized a very successful two day “Artist’s Evening” for members wishing to exhibit their paintings or other works of art.

Linda is also on the Board of Directors at Gorge Vale and will be in charge of various activities for the Canadian Men’s Senior Championship to be held at GVGC in August 2009.

During the 1998-1999 season, Linda joined the Zone 5 Women’s Executive as Vice Chair, assuming the responsibility of organizing and running the Zone Championships, and moved up to Chair for the 2000-2001 period.

Linda’s Provincial service has been: