Congratulations to all the Zone 5 Junior Girls that participated in the 2019 BC Junior Championship at Fairwinds, July 2nd to 5th.  A challenging course that tested the girls to maintain their focus and battle through some difficult situations.  Congratulations to the Zone 5 Team of Cindy Koira and Rebecca Kim, both from Victoria Golf Club, who placed second in the Team Competition, and to Cindy and her  partner, Sonja Tang, who placed 3rd in the Best Ball Competition.   Other members of Zone 5 that made the trip were Lana Rummel (GV) who finished T17, Chelsea Truong (VGC), and Sarah Phipps (GV). 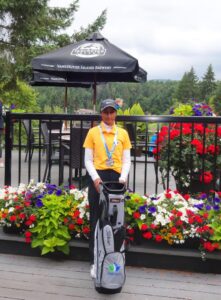 What a week for CINDY KOIRA!!.   Cindy, who just finished Grade 11 at Stelly’s Secondary in Saanichton, had as piece of the lead from day one and was disappointed she couldn’t finish it off.  “It was a good experience,” she said.  “This is the biggest tournament where I have been in the lead.  So I think I learned some things.  Angela played really well, though.  I was better than yesterday.   I was pretty happy with my game except for some putts that didn’t go in.”

Champion Angela Zhang  (Shaughnessy),  Cindy, and Erin Lee (The Redwoods), will represent British Columbia in the inter-provincial team competition at the Canadian Junior Girls Championship, which goes July 30th – Aug. 2nd in Lethbridge, Alta.   “I am really excited about being on the BC Team,”  Cindy said.  “I didn’t play very well at the Canadian Juniors last year, so I want to do better this year”.

Good Luck at the Canadians, Cindy.

For more results, Click on the BC web site at britishcolumbiagolf.org/leaderboard