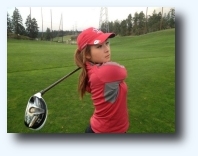 How many of us can say that we have our sights set on playing in the 2016 Olympic Games? Well, this 15 year old, who resides in the Western Communities outside of Victoria, has just such a challenge on her ‘bucket list’

A sophomore at Claremont Secondary High School, Naomi has accomplished considerable in the world of golf with her most recent accolade to be named to the 2013 National Development Squad by Golf Canada.

Always on the practice range sharpening her skills, Naomi will tell you that the strongest part of her game is her short game and iron play. Emphasis is therefore on the long game, although to the admiring fan, all parts of her game look exceptional!

Naomi’s tip of the day: When you are having a bad hole, or you are trying to keep yourself calm, sing your favourite song. This could be very beneficial to numerous golfers, young and old, male or female!

While it would seem there are not many hours left for normal teenager activities, Naomi enjoys cooking/baking, dancing, singing and hanging out with friends and family.

The LPGA is some years away, however, it is a strong possibility that we will one day see Naomi’s name on their leaderboard, and deservedly so as she works hard towards that goal.

Naomi would like to pass along a big thank you for all the support she has received from the Zone 5 organizers. These tournaments provide the first stepping stone for juniors to experience competitive play in organized events.

Ashley was born in Victoria, B.C. on July 13, 1983 and will enter her Grade 12 year this September at Stellys High School.

When she was 13, Ashley’s main interests outside of school were rowing and swimming with her sights set on becoming a Life-Guard. She worked very hard to earn her Bronze and Gold Medallions in swimming and at the same time keep on rowing.

Ashley joined Gorge Vale Golf Club in 1996 and under the tutelage of her Step-Grandad, Bernie O’Leary, found a challenge that began to replace swimming and rowing. Hours and hours on the practice range and a love of competition has seen her index factor plummet to 6.8. Under the watchful eye of coach John Randle, Assistant Pro at Gorge Vale, Ashley will soon need to set aside shelf space for her trophies. This year valuable experience was gained by entering the 3-day C-FAX Amateur and then on to the B.C. Juniors in Kelowna, as well as doing very well in local District 1 Junior tournaments . Ashley receives tremendous support from her family who are on hand for all tournaments. Her most recent accomplishment was winning the 2000 Ladies Club Championship at Gorge Vale.

An “A” student, Ashley hopes to continue her education on a golf scholarship, and to that end, has sent her resume to a number of universities in the US.