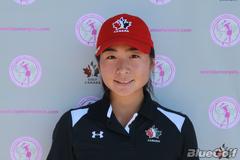 Team Canada National Amateur Squad member, Naomi Ko, notched four birdies in her final round enroute to a 1-under 279 tournament total and a T7 result at the Ken-Wo Club in New Minas, NS.  As the low Canadian in the field, the 18 year old has earned an exemption into the 2016 Canadian Pacific Women’s Open taking place in Alberta this August.

Naomi is a member of Royal Colwood Golf Club and a fast rising star on the National Team.

Congratulations, Naomi, and Good Luck at the Open.